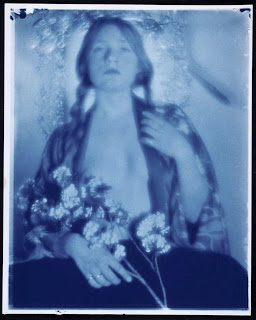 Florence Peterson in kimono with flowers - Cyanotype - by Paul Burty Haviland c. between 1898 and 1916

Cyanotype is a photographic printing process that gives a cyan-blue print. The process was popular in engineering circles well into the 20th century. The simple and low-cost process enabled them to produce large-scale copies of their work, referred to as blueprints.

The English scientist/astronomer Sir John Herschel discovered this procedure in 1842. Even though John Herschel is perhaps the inventor of the cyanotype process, Anna Atkins actually brought this to photography. She created a limited series of cyanotype books that documented ferns and other plant life. By using this process, Anna Atkins is regarded as the first female photographer.