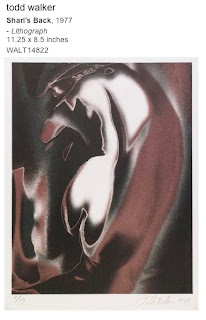 In fact, Walker worked with digital art before anyone even knew what it was. According to the Stephen Cohen Gallery, Todd Walker was experimenting with digital art in the 1960s, writing his own programs and creating revolutionary digital effects with his photos.

Walker was born in Salt Lake City in 1917, and raised in Los Angeles. He established himself as a successful commercial photographer in Southern California in the late 1940s, a career he eventually gave up to pursue his artistic interests. Beginning with solarization and alternative processes in the 1960s, Walker developed a unique and personal visual language, which runs through the last three decades of his work. In 1981 he began using digital processing to extend his photographic technique, and became proficient at computer programming to create the tools he required. Todd Walker died in Tucson, AZ on September 13, 1998, 12 days before his 81st birthday.